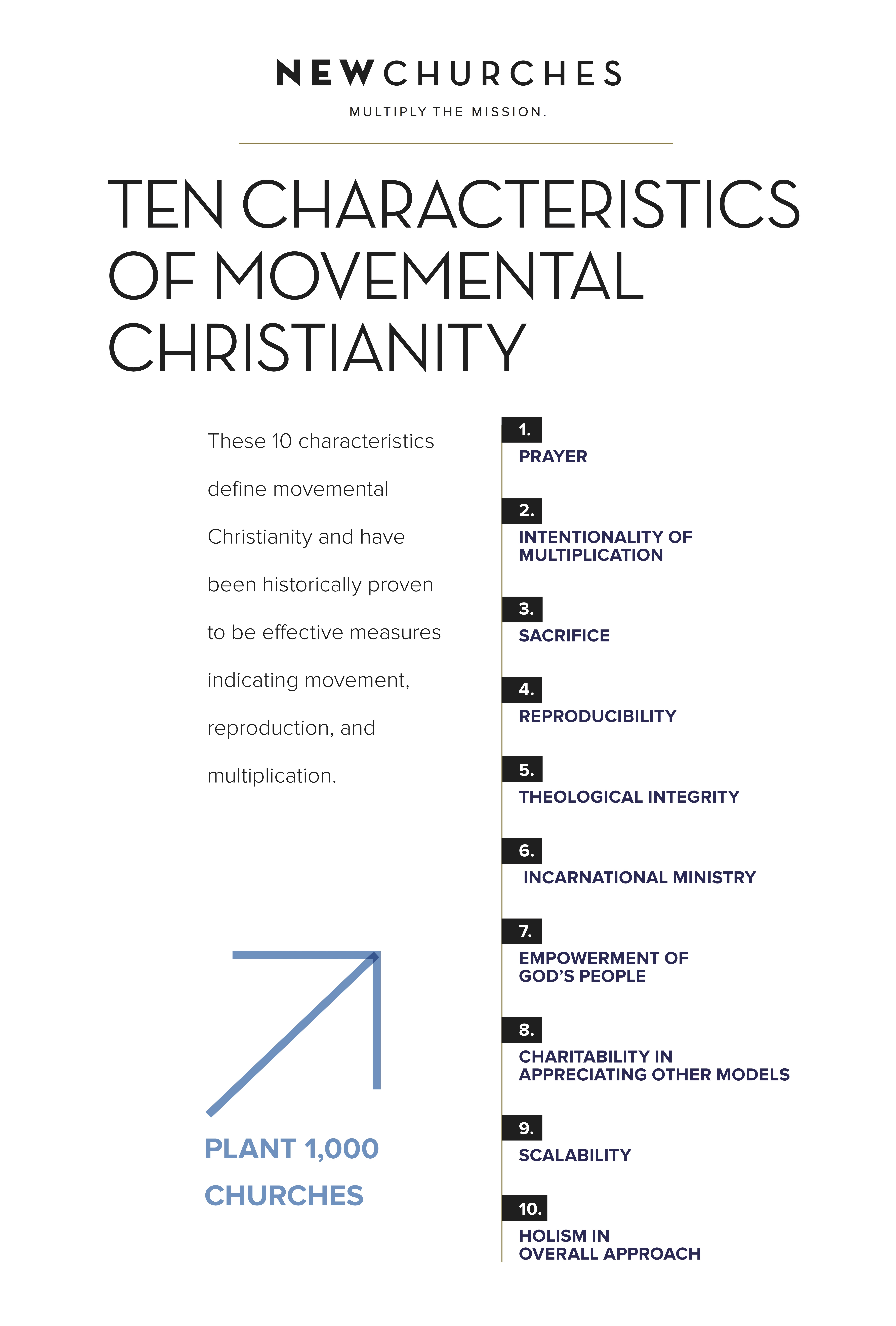 In the West, if and when we see movements of churches planting 1,000 churches in their lifetime, ?then we believe the following ten characteristics will be present. Based on our observations, movemental Christianity will have some of these characteristics.

Prayer will need to be more than? a habit or a discipline. It must be a conviction that establishes its priority and be expressed in a consistent rhythm of repentance and renewed faith. Before we see movemental Christianity where we are moving from addition to reproduction, we will have to be fervently praying and asking God to change us first.

We will also need to show the intention of being movemental (see the next eight elements). This involves an outward vision instead of inward, raising up others instead of increasing ourselves, and seeking the kingdom? of God and not building or protecting our personal kingdom. As of now, I believe our focus is primarily defensive and incremental, not intentional? and exponential.

Change will not come without giving something up. No movement will happen until pressure is applied to move the church from the place of being static to a body of believers in action—from addition to reproduction. Just as the body grows muscle and changes with the tension of weights being lifted, so the church will change and grow in the midst of tension. Denominations, individual churches, and believers must pay this sacrifice.

Movements do not occur through large things (big budgets, big plans, big teams). They occur through small units that are readily reproducible. If you want to see a movement, things need to be accessible and reproducible at every level. Accessible means that

the average person can understand and participate in the vision without any advanced knowledge or special training. Reproducible means that the concepts are reduced from complexity to simplicity to virally spread. This is a challenge to resist the grandiose in favor of the reproducible.

Churches wanting to be involved in transformative, movemental Christianity hold firm and passionate positions on biblical views. These views are rooted in something that goes deeper than a charismatic leader or visionary but are planted in firm convictions that flow out of the Bible.

This transitions the motivation for movement from the temporary (a leader or a model) to the permanent (the Scriptures). The Baptists and Methodists won? the Western Frontier (1795–1810) because they were passionate about their beliefs. The Pentecostals are not de-emphasizing what they believe to win Central America. Movements are found among people with robust beliefs, not generic and downplayed belief systems.

Movemental Christianity recognizes that the gospel is unchanging, but the expressions and results of the gospel will vary from culture to culture. It also recognizes that as the sent people of God we are called to appropriately identify with those to whom we have been sent. The unchanging truth of the gospel needs to translate to? the changing language and values? of people around us. Within this environment, Christians speak and act in a way that directly addresses the environment in which we live, work, and recreate with the good news of Jesus.

All of this means that we must understand both the gospel and culture in order to be a biblically faithful and culturally relevant countercultural movement of God. Movements will look like, and be owned by, ordinary people in ordinary life that are compelled by an extraordinary vision for the world.

Movements only occur when the disempowered are given the freedom, and then take up the responsibility to lead. In our case, the clergification of the Church has marginalized those God has called—all people. As believers, we are equipped with the same Spirit that raised Jesus from the dead, and the Bible calls all Christians a “royal priesthood.” Yet, the disempowerment of church members simultaneously satisfies and disturbs many pastors.

Frustration results from not being ?able to get others to do the work? of ministry, but satisfaction comes? from being affirmed in doing the? work others should be doing. Some pastors want people to shoulder the grunt work of ministry without having much say in leadership or vision, and this disempowers and disillusions qualified leaders to look elsewhere to exercise their gifting and calling. Such codependency and suppression is the death knell of movemental Christianity.

8) Charitability in? Appreciating Other Models.

Movemental Christianity is messy. Those involved in it make mistakes, overemphasize certain things, and even believe different things than we do. But no one gives his or her life for a bland belief system.

It takes a wide net to gather the most fish, and it takes a wide variety of perspectives and ideas to reach a wide portion of culture. A movement of God cannot be contained in a single movement or theological tradition, and no one has it completely figured out. Therefore, movemental Christianity requires charity to maintain our firmly held convictions while rejoicing for and speaking well about those with whom we differ but are being greatly blessed by God.

Movements often ?are stifled within smaller communities because of the small-mindedness? and lack of preparation of local leaders. When God begins to move and believers allow movemental Christianity to begin to grow, leaders and structures must be able to? rapidly reorient and resize to not stifle such movements.

In many cases, movements will break out of structures rather than mold within them. More frequently, non-scalable structures (like some training programs or denominational structures) will actually hinder the movement. So, leaders need to plan at the foundational level for movement and growth, building structures that are flexible to a ?variety of leadership and adaptable ?to a variety of demographics. These structures become bottlenecks rather than catalysts, so hold them loosely.

The modern evangelical separation? of gospel proclamation and societal transformation is a historical oddity. Jesus spoke directly to the idolatry and hypocrisy in the culture around Him. It takes hard work to turn the dial from theoretical concepts to real-life action, and Christians are notorious for talking more about serving the poor than actually doing it.

But movemental Christianity must practice holistic ministry in the way of Jesus to see real, lasting, multiplying success. Current movements and historical awakenings were and are accompanied by societal transformation.

We believe these ten characteristics will be present in the movemental Christianity to come—and have? been proven historically to be effective measures where there’s been movement, reproduction, and multiplication.

This was an excerpt from the newest book that I wrote with Daniel Im, 1000 Churches: How Past Movements Did It—And How Your Church Can, Too. Download it for free here to learn how to move your church move from addition to reproduction—so that you can be a part of planting 1,000 churches in your lifetime and stirring a movement of kingdom multipliers.