Chin Up! When You Follow Jesus, You Can’t Lose It All

Chin Up! When You Follow Jesus, You Can’t Lose It All 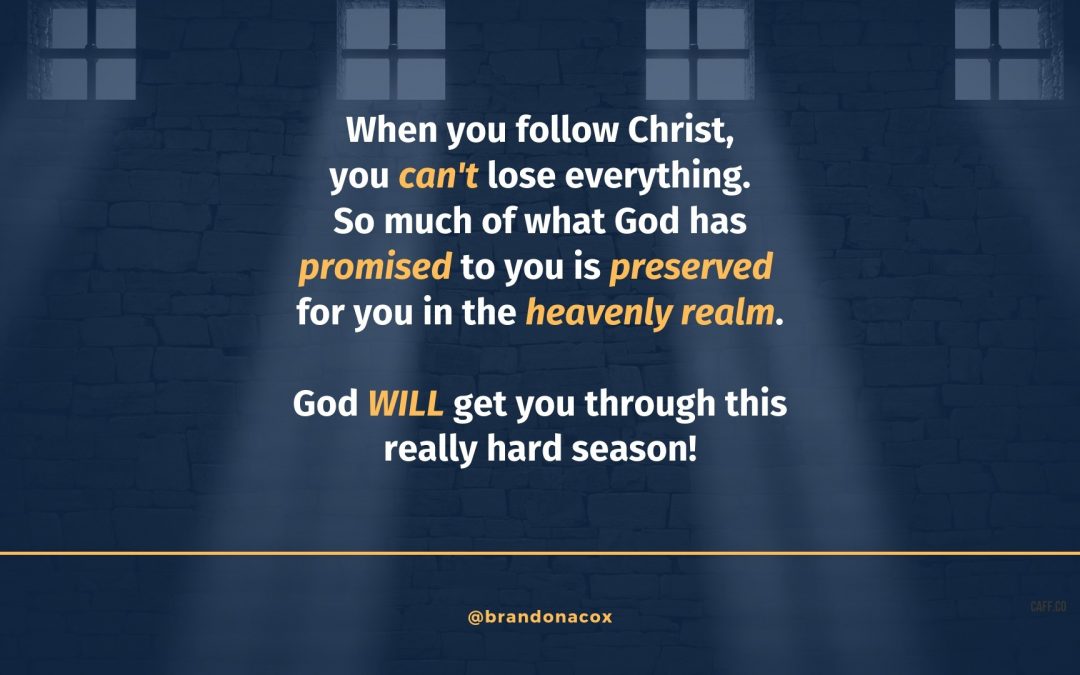 by Brandon Cox: Jacob, son of Isaac and grandson of Abraham, had twelve sons, including Joseph and the youngest, Benjamin. The ten older brothers had sold Joseph into slavery and allowed Jacob to believe his son had died. His heart was broken.

Later, when famine swept across the land, the ten older brothers traveled to Egypt to buy grain only to be received by Joseph, the second most powerful man in the empire under Pharaoh. They didn’t recognize him, so Joseph began to use the opportunity to see that his youngest brother hadn’t fallen prey to their jealousy. He kept one brother in prison and sent the other nine back to Jacob, demanding that they return with Benjamin to prove they weren’t spies.

In the middle of that story, Jacob utters one of the most defeated phrases someone can say out loud. When his sons explain all that is happening and what Joseph is requiring of them, he exclaims to them,

Their father Jacob said to them, “You have deprived me of my children. Joseph is no more and Simeon is no more, and now you want to take Benjamin. Everything is against me!”

I’ve said it before. Have you? EVERYTHING is against me!

We lose a couple of battles and, even though we are guaranteed eternal victory we still proclaim, I just can’t win!

A relationship falls apart – maybe even more than one relationship – and we declare, Everyone has abandoned me!

The economy takes a turn downward and we run into financial trouble and we decide, I’ve lost everything!

When we speak in those absolute terms – everything is wrong… nothing is going right… my whole life is falling apart – what we’re really doing is agreeing with the Enemy, the Liar, Satan. We’re ignoring God’s richest and deepest blessings, forsaking our faith in his promises, and we’re agreeing with the one who whispers such lies into our ears.

The truth, for every Christ-follower who walks the earth, is that we are more than winners! We cannot be beaten! We cannot ultimately lose everything because so much of what God has promised to us is preserved in the heavenly realm in which nothing ever wastes away.

You haven’t lost it all. You can never lose it all. You’re just going through a very hard moment, and God is going to see you through it with the presence of his Holy Spirit in your life.

Chin up! We WILL get through this!

Source: Chin Up! When You Follow Jesus, You Can’t Lose It All